The Mt. Buller Sky Run – 50km of running and walking, 2600m metres of ascending and descending in less than 8 hours and only 25 to 30gms of carbohydrates consumed throughout the adventure.

In Part One I talked about the highs and lows of my first ultra marathon, my rookie mistakes getting lost and running the course. Part Two is about Running on Fat, how I felt it worked, my recovery and what’s next.

People ask me all the time why have I chosen Low Carbohydrate High Fat (LCHF) as my way of eating/fueling my body. My reasons are fairly simple. Genetically the numbers are against me, no matter how much I run I cannot run from my family history. Three years ago I quit all processed sugars and reduced my processed carbohydrate intake considerably.

In March 2014 I was introduced to the concept of LCHF and I began cutting my carbohydrate intake further, only consuming carbohydrates from fruit and vegetables and experimenting with LCHF meals.

The Mt Buller Sky Run is my second race since making the switch, so the question remains do I believe LCHF – Running on Fat assisted or hindered my performance during this race? I believe it helped me.

Since October last year, I have been consuming a very low carbohydrate diet. Most non training days I consume less than 50gms of carbohydrates per day and on my training days I may have up to 100gms. Having trialed various combinations of meals and foods in the lead up to the race, I went into the Mt. Buller Sky Run confident of my pre-race nutrition plan. My pre-race dinner for this race was lamb shanks with a good serve of roasted vegetables including sweet potato.

Breakfast was a good two hours before I started. It was never my intention to start the Mt. Buller Sky Run in a fasted state. I know some people do race fasted when doing LCHF but I personally think it’s very important to consider the duration of the event when deciding to fast beforehand or not. Wanting to minimise any insulin spike resulting from a high carbohydrate intake, my breakfast consisted of;

All up I had maybe 20 or 30gms of carbohydrates at best. I was going to have a coffee as well but time felt like it was against me so I didn’t bother. For the race itself I was carrying;

My Emergency food was:

My watch tells me that I burned 5000 calories in this race; I estimate I consumed less than 500 calories during it. I started well and my energy levels were fine. I was neither hungry nor thirsty but I took a few occasional sips of water early as I knew it would be a long day. My plan was to take one salt tablet every hour, which I did. From memory the first time I ate anything was around the 22km mark. I had taken two, possibly three salt tablets up to this point and in reality I was not hungry so I just had a little piece of the lemon and macadamia nut bar.

It’s hard to say when I ate in addition to this but I would have had a little piece of that macadamia nut bar every hour or so after that. I do remember finishing it off just after the ”Thank Christ Corner” so at around the 45km mark and at about 6.5 hrs. Would I use it in the future? As emergency food definitely. As part of my race nutrition plan possibly.

Going down the River Spur trail I did grab a few of the macadamia nuts out of the bag. That was like eating sand. I figured I wouldn’t do that again but might trial nut butter instead for future races. Along the River Spur trail and back up Mt Buller I also had the homemade gel. I didn’t need much, less than a teaspoon full and it was fantastic. The amount of dark chocolate in it would have contributed maybe 5gms of carbohydrates in the whole tube so it was negligible and wouldn’t impact on my fat adaption I believed. There was a point while going back up Mt. Buller where I would have loved a full fat coffee. Was it the caffeine or fat I was craving? Hard to say, either way my energy levels were not dropping without it and that was the key. 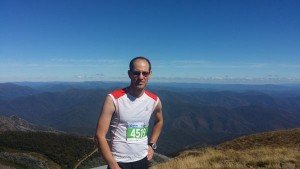 Did I hit a wall? I don’t believe so. When you compare the photo of me on top of Mt Buller after running 47kms to the one on Mt Stirling taken at about 8kms I still look surprisingly fresh. Physically my legs were hammered but mentally I was fine. In the latter half of the race I was reduced to walking, (due to a bad ankle) yet I still maintained a steady pace. I had lost over 40mins to the field going off course but in the end the runner in front only finished 6mins ahead of me.

Post Race Recovery. I had the usual post marathon soreness but the worst of it was gone in two days and by Thursday I was moving quite well. The following Monday I ran a solid 15km at Lysterfield Lake on the bike tracks and was fine. The Thursday after that week I completed a full interval session in the morning and that afternoon was put through a leg strength and conditioning set with the new physiotherapist at work. I personally consider this as significant in regard to my recovery. In all other races where I have emptied the tank (especially my two marathons) it has taken me 6 to 8 weeks to return to intervals. Also, in all the years I have run the morning interval sessions I have never followed it up with a strength session on the same day. To do this two weeks after a big race is a definite improvement in my recovery. Yes, I was sore afterwards and my Saturday run was a bit of a slow shuffle yet I still ran 16km comfortably on the Sunday. I now have my sights set on the Great Ocean Road Marathon in the middle of May. In the seven years since I have returned to running I don’t remember ever recovering this well, nor this quickly. In the past I wouldn’t have contemplated running two big runs so close together.

So what’s next? All going well, I will be running the Great Ocean Road Marathon and it goes without saying it will be running on fat again. I am also looking forward to the Low Carb Down Under conference on June 7th at the St Kilda town hall where the co-author of ‘The Art and Science of Low Carbohydrate Performance’, Jeff  S Volek, PhD, RD will be presenting. In the mean time I am refining my LCHF journey, it worked well for me on the Mt Buller Sky Run but I believe, as in all aspects of running, that I can refine and improve on it much more.

I know LCHF is controversial, and it goes against all supposed scientific sporting nutrition plans. I have been told more than once that I am crazy; LCHF is far too restrictive and dangerous, that it will kill me and so on. However, at the end of the day, I feel fantastic and I have loads of energy. I feel I get stronger as my runs progress, especially when I am on track with my nutrition. My recovery from training sessions and this race have been fantastic and ultimately it works well for me.