This documentary starring Damon Gameau will change the way you think about healthy food.

THAT SUGAR FILM is one man’s journey to discover the bitter truth about sugar. Damon Gameau embarks on a unique experiment to document the effects of a high sugar diet on a healthy body, consuming only foods that are commonly perceived as ‘healthy’. Through this entertaining and informative journey, Damon highlights some of the issues that plague the sugar industry, and where sugar lurks on supermarket shelves.

That Sugar Film Review By EyeforFilm.co.uk

“There is no doubting the similarities between the directorial debut of actor-turned-documentarian Damon Gameau and Morgan Spurlock’s break-out Super Size Me. Both films see their directors turn themselves into human guinea pigs to test whether an eating regime has unhealthy consequences and both use an eye-catching set of gimmicks and techniques to keep audiences engaged.

The big difference is that even a young child would probably suspect that eating massive hamburgers and fries for every meal is bad for you, whereas Gameau opts only to consume the average daily Aussie intake of sugar – albeit a whopping 40 teaspoons – via ‘healthy foods’. That means no ice-cream, chocolate or doughnuts, just juices, cereal bars and the likes of low-fat yoghurt – and he maintains his regular workout regime. He starts the diet from a good base, having cut out refined sugar from his diet a couple of years previously in order to impress the woman who is, at the start of the film, soon to become the mother of his first child.

The results are pretty shocking and his illustrations of what is happening to his body via cutesy ideas such as snorting himself up his own nose to check out his brain are effective. The day in which he demonstrates just how much sweet stuff is in some of the products he is eating by switching them out for the white sugar equivalent are also likely to horrify mums – instead of a cereal bar for an afternoon snack, for example, he trades it out for two wafer biscuits filled with cubes of sugar.

If that isn’t enough to set your teeth on edge, then his side trip to Kentucky almost certainly will be. There he investigates the impact of Mountain Dew on the oral health of the residents with pretty grim results. The same is true of an excursion to an aboriginal town where banning Coca-Cola resulted in a huge improvement in health. While he doesn’t dwell on the way that corporations manipulate food in order to sell more of it, he highlights strong specific examples that give pause for thought…

..techniques certainly keep things moving along and the inventiveness sweetens up his message so that it is likely to hold the interest of teenagers as well as adults, giving it the potential to be a great educational tool. Of course, an experiment on one person isn’t cut-and-dried proof but it does suggest the need for considerable more research in this area – and you’ll certainly never look at a smoothie in quite the same way again.” 4 out of 5 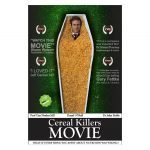 ‘Cereal Killers’ is a feature length documentary about one man’s attempt to hack his genes and drop dead healthy by turning the food pyramid on its head. The film follows Donal O’Neill– a lean, fit, seemingly healthy 41 year old … Read More